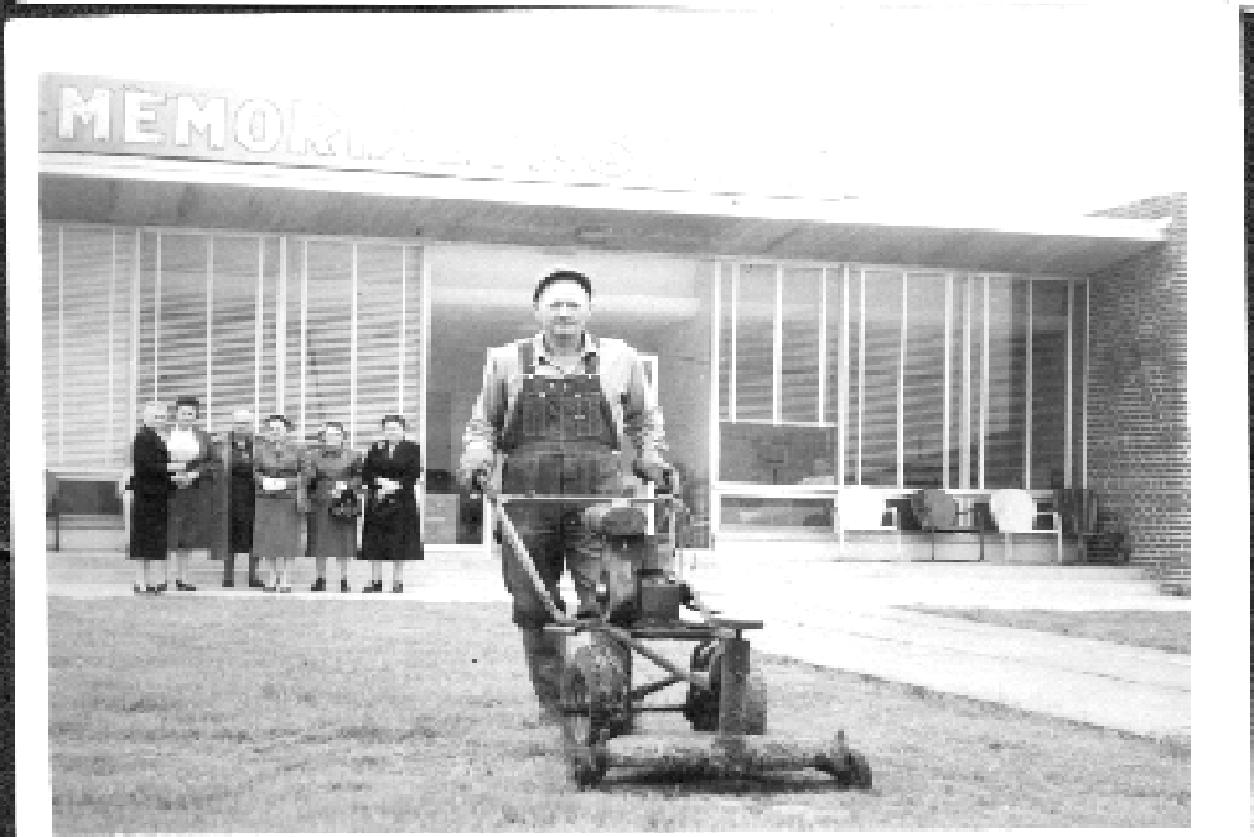 April 9, 1950 marked the day for the formal opening for Memorial Hospital (subsequently known as Choctaw Memorial Hospital) in Hugo, Oklahoma. On that day, people from communities state-wide and from around the country participated in an unprecedented event celebrating the earnest and memorable efforts of a community from our past. Because of these people and their commitment, compassion, and dedication, today we continue to celebrate the success of a community hospital which has literally served thousands of people over the past fifty-nine years. We are pleased to dedicate this site to the memory of those individuals, long-gone but not forgotten, and to those individuals who are still here today, who were responsible for realizing a “community dream”—a dream to have a rural community hospital to serve the health care needs of Choctaw County. Through their determination and fortitude, and

because of the dream they envisioned back in the mid-1940’s to have a community hospital, these individuals have truly been responsible, in part, for saving and improving the quality of lives for many people. They gave the people for many generations to come a community hospital to be proud of. In this writer’s opinion, this is a long-forgotten era that should be remembered today, because it takes us back to a time when people worked together for a common goal for the good of all men— an economically-challenged time when pie suppers, fashion revues, and formal weddings took place to support the financial needs for the operational expenses and the construction costs for the Hospital. Community camaraderie among supporters seemed genuinely meshed back in those days. The commitment to build the Hospital forged on despite the many hardships and setbacks the community may have had to endure during the times.

According to an article in the April 9, 1950 edition of The Hugo Daily News publication, the actual concept for the hospital initiated with ladies from the B. & P.W., a group of ladies, who in the spring of 1945 “conceived the idea long before the bonds were voted for the present hospital that a Memorial hospital was needed in Choctaw County”. Apparently, these ladies were responsible for starting a fund drive to help get the Hospital started. Then other fund drives were also planned during the fall of 1949 to support this effort. There was a “Back-to-School Style Revue” planned at the local Erie Theater, “which added to the specific fund for beautifying, landscaping and making other improvements on the hospital grounds”. $545 was raised for the Hugo Federation of Garden Clubs for that purpose. This endeavor was headed by Mrs. James B. Milling, a local community member, for the purpose of “grounds improvement”. According to this newspaper article, Mrs. Milling had “taken an active part in promoting the hospital since Tuesday, April 1, 1947, when she and Mrs. Jack Fry, Mrs. Roy Sadler, Mrs. L.L. McKenzie, Mrs. R. B. McAlister and Mrs. John Hoffman served on a steering committee which met to hear Dr. Fred Switzer explain the benefits to be derived from the hospital”.

According to this article, “On April 28, 1947, the citizens of Choctaw County approved a bond issue of $200,000 to be met by a supplemental federal grant in order that the Memorial Hospital might be constructed and equipped. This assured the citizens of Southeast Oklahoma of having the most complete hospital to be found anywhere in the Southwest and the physicians of the area, superior facilities in a Hospital.” Also, according to this article, “The reason for naming this hospital the Memorial Hospital was in order to pay tribute to the boys and men who lost their lives in the two World Wars. It was felt that no more fitting tribute would be provided as a permanent tribute to those heroes.”

The administration process for the Hospital at that time was initiated through the Board of County Commissioners, who had to comply with “The Oklahoma Hospital Act”. According to this Act, the County Commissioners had to appoint a five-man board, whose responsibilities and duties would be “to determine all policies of operation, though it would not operate the hospital directly itself”. Apparently, these board members would “receive no pay and could not be office holders”. The board of directors had the responsibility for selecting the first hospital administrator, who was A.F. Wasson of Taos, New Mexico, a man who had apparently had twenty-eight previous years experience as a administrator of hospitals.

According to the article in the April 9, 1950 edition of The Hugo Daily News, the construction of the hospital had begun on 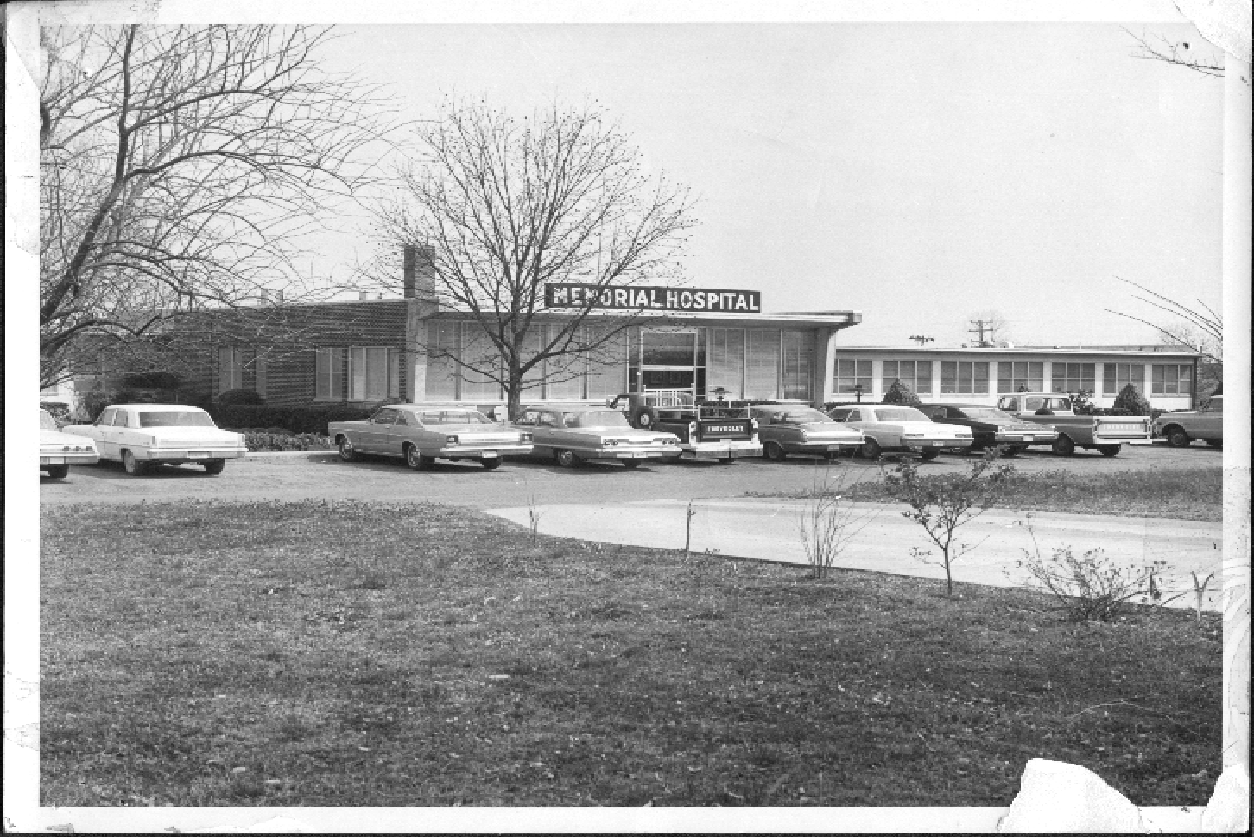 January 10, 1949 after the land needed for the hospital was purchased for $2100 with help from the community. All patient rooms were to be designed the same size and large enough to accommodate two beds if necessary. The hospital would have a modern ventilation system “to ensure comfortably cool rooms. Also, according to the article, the windowed front of the hospital and the modernistic office for Mr. Wasson, along with the reception area were “beautiful and practicable in design”. The actual construction of the hospital began in January 10, 1949 by J. A. Sharrock and Son of Marshall, Texas. Claud Collins, chairman of the board of County Commissioners was responsible for lifting the first shovel of dirt at the ground breaking ceremony.

Memorial Hospital, later to be known as Choctaw Memorial Hospital, drew a crowd of 4,000 people on that Sunday in April, 1950 when it opened its doors’ to an official ceremony. It went through many changes throughout the years. One of the changes occurred in 1979, when the County/City Trust Agreement was formed. This change was described, in part, as the following: 1979 County/City Trust Agreement—Term and Purpose of Lease: “50 years from 4/l/79 to 3/31/29 OR to such date as all indebtedness incurred by the Authority pursuant to any Bond Indenture or to her evidence of indebtedness has been paid or provision for the payment thereof of has been duly made. The leased property is demised to the Authority for the purpose of enabling the Authority to assist the Lessor in the execution and performance of the public functions of the Lessor in respect of furnishing and providing adequate medical services & facilities at all times during the term of this Lease Agreement.”

Almost fifty-nine years from the date of the official opening of Memorial Hospital, April 1, 2009, marked another time in the history of Choctaw Memorial Hospital, when control of the Hospital went back to the County after a ¾-cent county- wide sales tax was voted on and approved by the people of Choctaw County. And, so marked another time in the era of a community hospital which had endured much during its fifty-nine years of service to our community. Over the years since 1950, so many people from the community have helped to ensure the quality of healthcare services we provide to our community and to others will continue to be a part of our history and our legacy for our small rural community. Since that time the Hospital has served thousands of people. Three additions to the Hospital have been added in 1959, 1962, and 1980 to help meet the demanding healthcare needs of a rural community. It is important for us to remember that the history of this Hospital has served its purpose and its commitment to the communities and people we serve and will always best be known for “touching the lives” of many people—people who we care about and can always say, “Come to us at Choctaw Memorial Hospital—‘HEALTHCARE CLOSE TO HOME.”