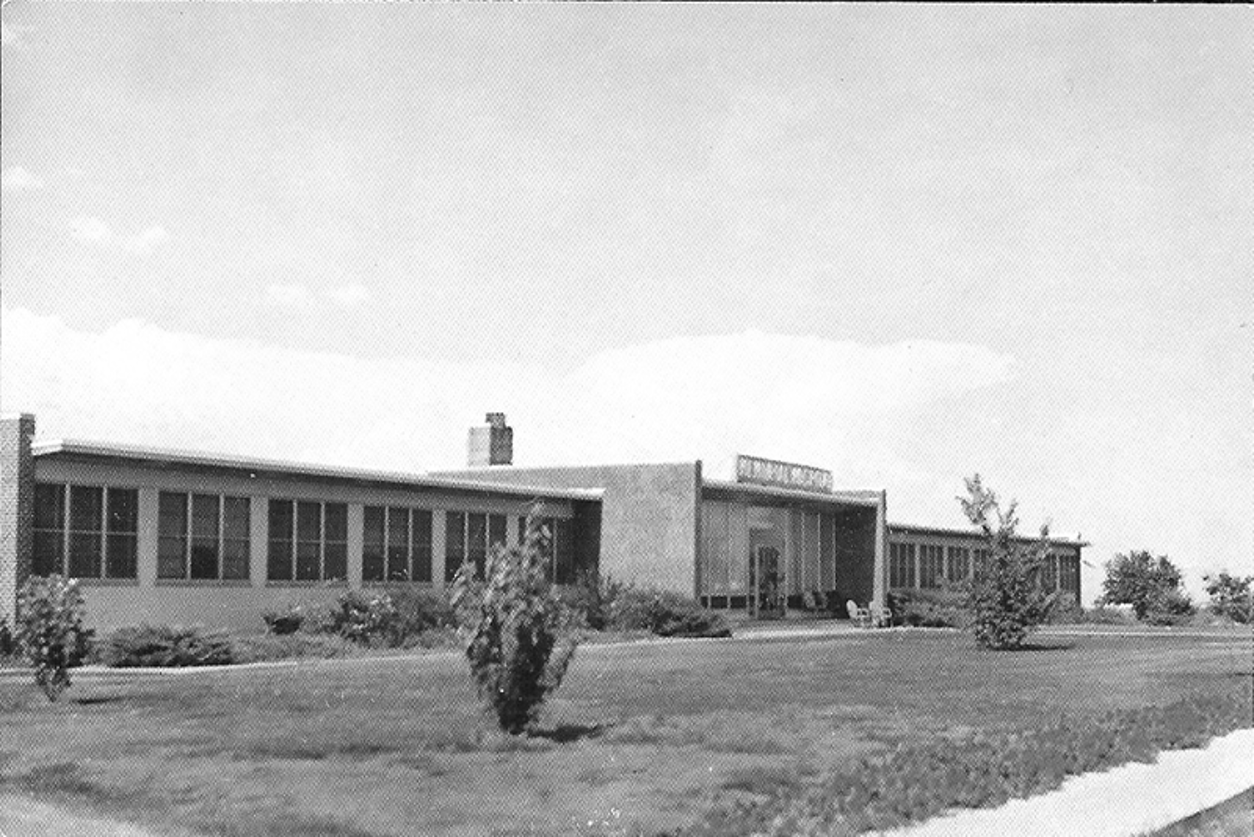 This article was originally published in the Hugo Daily News on April 9, 1950.

On April 28, 1947, the citizens of Choctaw County approved a bond issue of $200,000 to be met by a supplemental federal grant in order that the Memorial Hospital might be constructed and equipped.

This assured the citizens of Southeast Oklahoma of having the most complete hospital to be found anywhere in the Southwest and the physicians of the area, superior facilities in a Hospital.

two World Wars. It was felt that no more fitting tribute could be provided as a permanent tribute to those heroes.

As to the administration of the hospital the board of County Commissioners have complied with the Oklahoma Hospital act.

According to the above Act, the County Commissioners are required to appoint a five man board, members of which receive no pay and are not office holders. It is the duty of this board to determine all policies of operation, though it would not operate the hospital directly itself.

The board of control from the several methods advocated by the Oklahoma Hospital act, decided to select an administrator with experience in the field of hospital management and give this man complete reins in the administration of the Hospital.

Selected by the board during February of this year was A.F. Wasson of Taos, New Mexico—a man who has been successful as a hospital administrator for the past twenty-eight years, having served as administrator of hospitals at Muskogee, Miami and Mangrum.

One of the first problems confronting the board of County Commissioners after the voting of the bond issue in April 1947 was a site for the hospital. Through Charley Switzer, then acres just east of the city limits on the Kirk road were located and Dr. E. A. Johnson purchased this land in order that it would be assured as the hospital site.

Mrs. M.V. Graham was appointed as chairman of a fund-drive committee to buy this land from Dr. Johnson. Serving with her was R. C. Newton and Robert Lee Hauser. Through the efforts of Mrs. Graham, her committee, the B and PW members, and through the cooperation of many citizens, the $2100 necessary to purchase this land was raised and the deed and abstract delivered by Mrs. Graham to Sam Spence, court clerk, who in turn presented it to the county commissioners.

Those who donated for the purchase of the hospital land site from Dr. Johnson include the following: Dr. Floyd Waters, Dr. . . . (Continued on Page 6. (of the Hugo Daily News publication)).

During April 1948, the county commissioners, selected the firm of Coston and Frankfort, Oklahoma City, as the architects.

All rooms for patients are of the same size and are large enough to accommodate two beds if necessary. 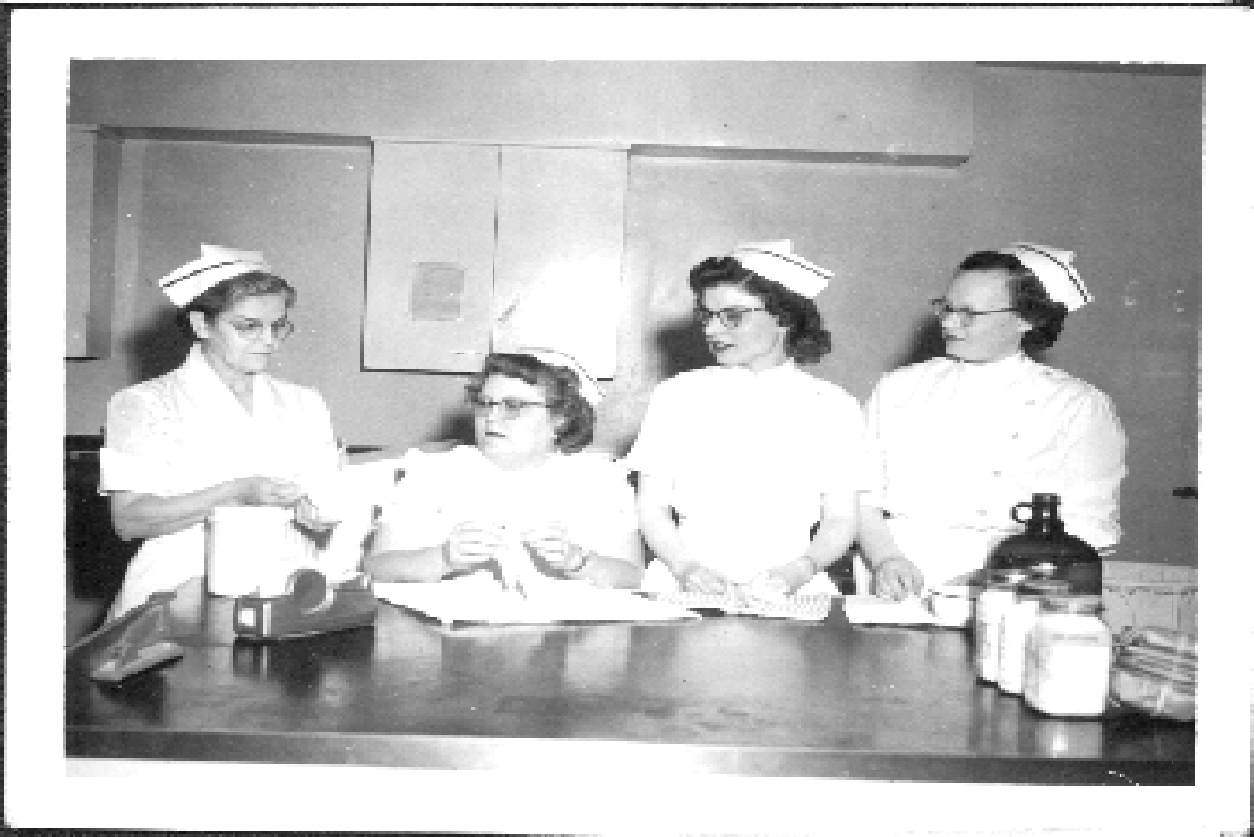 Modern ventilating engineering has been incorporated in planning the buildings so as to ensure comfortably cool rooms, most of which are located on the south. The windowed front of the hospital and the modernistic office for Mr. Wasson, along with the reception office, are beautiful and practicable in design.

The construction of this hospital was by J. A. Sharrock and Son of Marshall, Texas, who began the work on January 10,1949. At that time a ground breaking ceremony was held, with

Claud Collins, who was chairman of the board of County Commissioners at that time lifting the first shovel of dirt.

Since the construction of the hospital began, many efforts have been made to raise necessary funds for the opening. With a fund which was started by the B. & P.W. as early as the spring of 1945, when those ladies had conceived the idea long before the bonds were voted for the present hospital that a Memorial hospital was needed in Choctaw County, as a starting amount, other fund drives were planned during the fall of 1949. On August 25, 1949, Mrs. Graham of Graham's Dress Shop and Bill McCarty, assistant manager of the local theaters, presented a Back-to-School Style Revue at the Erie Theater which added to the specific fund for beautifying, landscaping and making other improvements on the hospital grounds. Thus $545 was raised for the Hugo Federation of Garden Clubs, headed by Mrs. James B. Milling for the grounds improvements.

Mrs. Milling had taken an active part in promoting the hospital since Tuesday, April 1, 1947, when she and Mrs. Jack Fry, Mrs. Roy Sadler, Mrs. L. L. McKenzie, Mrs. R. B. McAlister and Mrs. John Hoffman served on a steering committee which met to hear Dr. Fred Switzer explain the benefits to be derived from the hospital.

Much commendation has been paid to the Hugo Garden Club for the blueprints which they have worked out for the landscaping of the grounds.

The Jaycees raised the necessary amount to memoralize a hospital room by sponsoring the Circus Round-UP in Hugo on Thursday, March 6, of this year. Ed Edinger president of the Jaycees, was aided in this affair by all the members with Eldridge Locke, James Redwine, Chester Cearley, Vester Songer, Lloyd Brooks and Bob Bohanon serving on a committee to work with O. A. Brewer, chairman of the Circus Round-Up Committee. 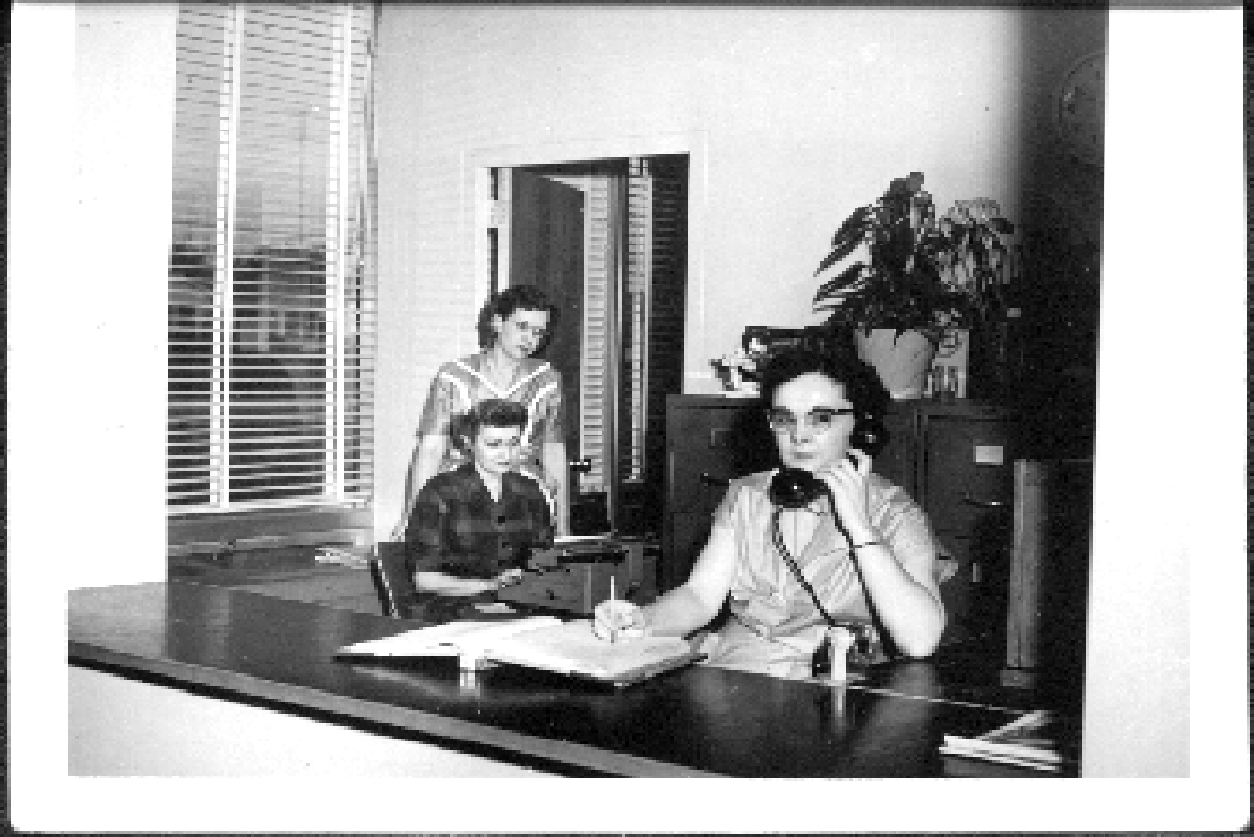 The Mercantile Division of the Chamber of Commerce carried on another fund raising drive for the Hospital by sponsoring a Fashion Revue and Public Wedding at the Hugo Armory on Thursday, March 14,1950.

Participating in the Fashion Revue were the following stores: Lambeth's, Graham's, Goldfeder's, the People's Store and Penne’s. Featured was the public wedding of Donald L. Williams and Nancy Janette Lemmons, both of Soper.

Pie suppers, square dances and other affairs have been held throughout the county in order to raise necessary amounts to memoralize rooms and many contributions have come from strictly donation sources.

Construction work on a semi-circular driveway laid with asphalt in conjunction with the beautification and landscaping committee, began during the early part of march, 1950 under the direction of the board of county commissioners.

Lester McDougall used road funds from his district to effect the construction of this driveway. Charley Cawley and John Mock participated in the supervisory of hauling surface material for this driveway and for the Kirk road in front of the Hospital.

During February of this year, the finance committee of the Chamber of Commerce was selected by Abner R. Jordan, president, to head a campaign to raise $15,000 necessary for the opening of the hospital.

Robert Firebaugh became chairman of this committee, with the members being Morrie Graver and Jimmie Campbell. The board of directors of the Chamber also agreed to participate in the campaign. From this fund the first three months of Administrator Wasson's salary will be paid, plus the amount necessary to pay the staff and other operating expenses for the opening of the hospital.

This amount has been raised by citizens and organizations memorializing rooms at the hospital. The people of Choctaw County thus expressed their faith in what they believe will be a successful and beneficial project.

The Memorial Hospital now stands as a monument to progress not only for Choctaw County, but also for all of Southeastern Oklahoma.

At the program held this afternoon at 2:30 o'clock, emphasis of this fact will be made. The hospital will formally open on Monday, April 10.

Article posted with permission from HDN.